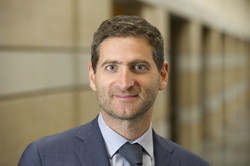 Andrea Pin (PhD, University of Turin, Italy) was a fall 2014 Notre Dame Kellogg Institute for International Studies visiting fellow. He is senior lecturer at the University of Padua, where he teaches constitutional law, comparative public law, and Islamic law.  His interests include constitutionalism in Middle East as well as on comparative perspectives on religious liberty, constitutional interpretation, and federalism. While at Notre Dame, he was also a visiting professor of European Union law at the Notre Dame Law School.

His Kellogg project, “The Arab Pursuit of Happiness,” investigated legal ideas about personhood, society, and political power that are being developed in new Middle Eastern constitutions, with a special concern for their anthropological underpinnings. This research explored the collective ideas on human development that the recent revolutions and new Arab constitutions and charters locate at the center of their nation-building or reconstruction processes.  The author of Laicità e islam nell’ordinamento italiano (Cedam, 2010) and La sovranità in America (Cedam, 2012), Pin has edited or coedited two books on human rights in addition to editing the Italian translation of John Witte Jr.’s Law and Protestantism: The Legal Teachings of the Lutheran Reformation (Cambridge University Press, 2002). His works have appeared in Italian, English, and Spanish.  A senior fellow at the Center for the Study of Law and Religion at Emory University and a member of the scientific board of Oasis International Foundation, Pin has spent extensive periods of study in Lebanon and Tunisia. He was a judicial clerk at the Italian Constitutional Court from 2011 to 2013.