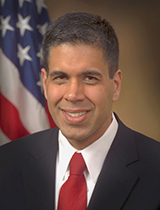 Sponsored by the NDLS Program on Constitutional Structure and the Potenziani Program in Constitutional Studies, Judge Thapar’s lecture is entitled, “Can Judges Speak? The First Amendment and the Courts.” During his visit, he will hold the James J. Clynes, Jr. Visiting Chair in the Ethics of Litigation Within the Judicial Process.

Judge Thapar serves in the United States District Court for the Eastern District of Kentucky and joined the Court in 2008 after being nominated by President George W. Bush. Prior to his confirmation, Judge Thapar served as the U.S. Attorney for the Eastern District of Kentucky. He graduated from Boston College with a bachelor's degree and received his J.D. from UC Berkeley School of Law.